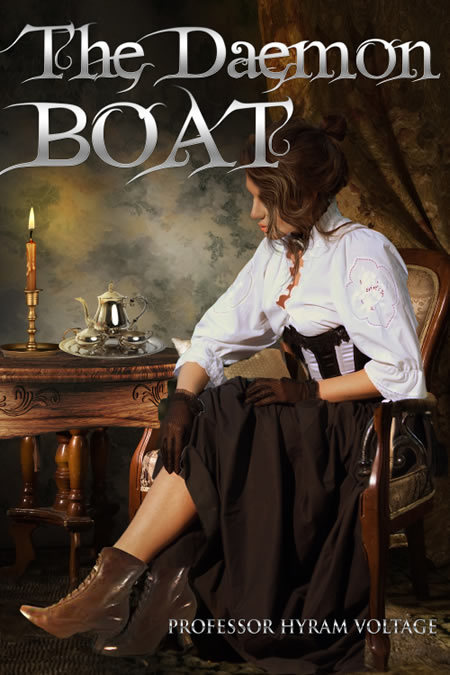 Poison, Spies, Gunfights, Piracy. On the Job Training can be a killer for a reluctant steampunk spy.

This is Professor Hyram Voltage’s first novel. Set in the late 1890s where air ships float in the sky and fantastic inventions are created every day, it is sea going ships that make the British Empire great.

Brought up as a proper English Lady, Ethel Mithra finds being a spy dangerous, confusing, and not at all the proper way to go about one’s day.

When the Daemon Boat strikes savagely at the mouth of the Thames almost sinking an American Coast Guard boat the British Ministry of War and Security must respond. Short of manpower the vindictive, American hating head, of the MWS is short of agents to accompany the flamboyant American spy, Sam Espinoza, in the pursuit of the looming threat of the Daemon boat. He tasked the recently hired clerk Ethel to join Sam. They must find out all they can and if possible stop this terror of the English Channel.

Crisscrossing France the two attempt to stay alive and elude enemy spies, the French criminal underworld, and assassins in their pursuit of the secrets of the destructive boat.

The closer they come to uncovering the Daemon Boat’s secrets the higher the stakes become. What started out as a threat to shipping turns into a threat far beyond what Ethel could have imaged.

In the heat of trying to steal the Daemon Boat secrets she turn pirate and steals the Daemon boat. Chased by a ship load of enemy spies and an English Warship, both who are in no mood to take prisoners, will she survive to deliver the empire shattering warning to the MWS?